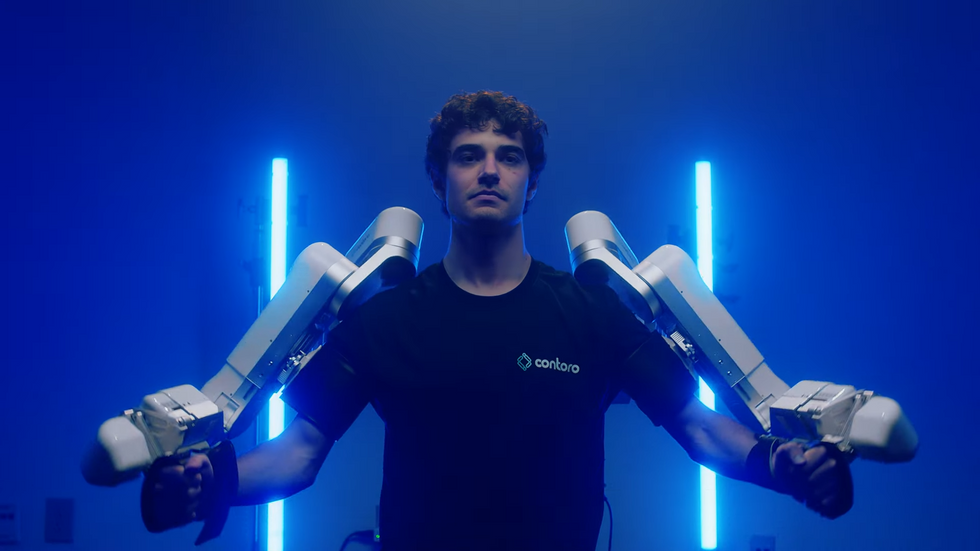 Video Friday is your weekly selection of awesome robotics videos, collected by your friends at IEEE Spectrum robotics. We also post a weekly calendar of upcoming robotics events for the next few months. Please send us your events for inclusion.

Until robots achieve 100 percent autonomy (HA), humans are going to need to step in from time to time, and Contoro is developing a system for intuitive, remote human intervention.

A one year update of our ongoing project with Ontario Power Generation (OPG) and RMUS Canada to investigate the capabilities of Boston Dynamics’ Spot robot for autonomous inspection and first response in the power sector. Highlights of the first year of the project, featuring the work of Ph.D. student Christopher Baird, include autonomous elevator riding and autonomous door opening (including proxy card access doors) as part of Autowalks, as well as autonomous firefighting.

Teams involved in DARPA’s Robotic Autonomy in Complex Environments with Resiliency (RACER) program have one experiment under their belts and will focus on even more difficult off-road landscapes at Camp Roberts, California, September 15–27. The program aims to give driverless combat vehicles off-road autonomy while traveling at speeds that keep pace with those driven by people in realistic situations.

Tool use has long been a hallmark of human intelligence, as well as a practical problem to solve for a vast array of robotic applications. But machines are still wonky at exerting just the right amount of force to control tools that aren’t rigidly attached to their hands. To manipulate said tools more robustly, researchers from MIT’s Computer Science and Artificial Intelligence Laboratory (CSAIL), in collaboration with the Toyota Research Institute (TRI), have designed a system that can grasp tools and apply the appropriate amount of force for a given task, like squeegeeing up liquid or writing out a word with a pen.

Cornell researchers installed electronic “brains” on solar-powered robots that are 100 to 250 micrometers in size, so the tiny bots can walk autonomously without being externally controlled.

Researchers at the University of California, San Diego, have developed soft devices containing algae that glow in the dark when experiencing mechanical stress, such as being squished, stretched, twisted or bent. The devices do not require any electronics to light up, making them an ideal choice for building soft robots that explore the deep sea and other dark environments, researchers said.

Our robotaxi is built to withstand a range of temperatures to ensure that the vehicle, and most importantly, its riders are never too hot or too cold…no matter the weather. Learn more about our thermal testing in the latest episode of Putting Zoox to the Test.

Skydio drones will do an excellent job of keeping you in frame, whatever happens.

With the accelerated urbanization in the world, the development and utilization of the underground space are important for economic and social development and the survival of people’s lives is important for all of us. Zhejiang University Huzhou Research Institute convened a robot team to conduct an underground space unknown environment exploration adventure in Yellow dragon cave. DEEP Robotics participate in this fascinated robot party and try out the underground challenges, also team up with the drone team (air-ground robot) to seek new collaboration.

The title of this video is “Ion Propulsion Drone Proves Its Commercial Viability,” but it seems like quite a leap from a 4.5-minute flight to reaching the 15-minute flight with a significant payload that would be required for last-mile delivery.

Welcome to this week’s edition of “How much stuff can you cram onto a Husky?”

In the Nanocopter AI challenge the teams demonstrated the AI they developed for Bitcraze AB’s Crazyflie nanocopters to perform vision-based obstacle avoidance at increasing speeds. The drones flew around in our “Cyberzoo,” avoiding a range of obstacles, from walls to poles and artificial plants. The drones were primarily scored on the distance they covered in the limited time but could gain extra points when flying also through gates.

Watch this drone deliver six eggs to an empty field!

Sorry, I shouldn’t be so snarky, but I’m still not sold on the whole urban drone delivery of groceries thing.

Flexiv is pleased to announce the launch of its ROS 2 driver to bring a better robot development experience for customers.

Northrop Grumman has been pioneering new capabilities in the undersea domain for more than 50 years. Manta Ray, a new unmanned underwater vehicle, taking its name from the massive “winged” fish, will need to be able to operate on long-duration, long-range missions in ocean environments without need for on-site human logistics support—a unique but important mission needed to address the complex nature of undersea warfare.

Some unique footage from drones that aren’t scared of getting a little wet.

People tend to overtrust sophisticated computing devices, especially those powered by AI. As these systems become more fully interactive with humans during the performance of day-to-day activities, ethical considerations in deploying these systems must be more carefully investigated. In this talk, we will discuss various forms of human overtrust with respect to these intelligent machines and possible ways to mitigate the impact of bias in our interactions with them.

The Jet Propulsion Laboratory’s success in landing the low-cost Mars Pathfinder mission in 1997 was viewed as proof that spacecraft could be built more often and for far less money—a radical cultural change NASA termed “Faster, Better, Cheaper.” The next challenge taken on by JPL was to fly two missions to Mars for the price of the single Pathfinder mission. Mars Climate Orbiter and the Mars Polar Lander both made it to the launchpad, on time and on budget, but were lost upon arrival at Mars, resulting in one of the most difficult periods in the history of JPL. “The Breaking Point” tells the story of the demise of these two missions and the abrupt end of NASA’s “Faster, Better, Cheaper” era.